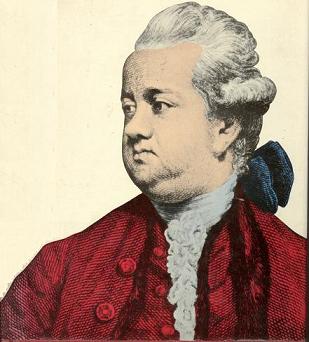 Edward Gibbon was the eldest of seven children born to Edward Gibbon and Julia Porten, and their only child to survive infancy. He attributed his survival to the affectionate care of his aunt, Catherine Porten, “the true mother of my mind as well as my health.”

It was she who encouraged him in his “invincible love of reading,” which he pursued widely in his grand-fatherʼs library until his “indiscriminate appetite subsided by degrees in the historic line.”

Gibbonʼs early schooling had been irregular and frequently interrupted by illness. Then, suddenly, as he approached his sixteenth year, “his disorders wonderfully vanished.” Shortly afterwards his father sent him to Oxford. Here he received neither instruction nor companionship, finding the boys frivolous, the dons indolent, and his fourteen months at the university “the most idle and unprofitable” of his whole life.

In the course of his solitary literary rambles during these fourteen months, Gibbon became converted to Catholicism. He wrote to his father of the step, and the elder Gibbon, with the impetuosity that seems to have characterised his dealings with his son, sent the sixteen-year-old youth to Lausanne. Here under the tutelage of the Calvinist minister, M. Pavilliard, young Gibbon repudiated his Catholicism and followed a carefully supervised program of studies with particular emphasis on the French and Latin classics and on the mastery of these languages.

At the age of twenty, Gibbon fell in love with Suzanne Curchod, who found his unprepossessing appearance “spirituelle et inguliere” and reciprocated his affections. His request for his fatherʼs permission to marry her met with refusal. He quietly acceded:

“Without his consent,” he wrote, “I was destitute and helpless. I sighed as a lover, I obeyed as a son.”

The Seven Years’ War had already been in progress for a year, when, in 1758, Gibbon returned to England, more French than English in his outlook. From 1759 until the war ended in 1763, he served as a captain under his father in the Hampshire Militia. He assessed the value of this experience as making him “an Englishman and a soldier” and as giving him insight into military organization and tactics,

“so that the Captain of the Hampshire Grenadiers has not been useless to the historian of the Roman Empire.”

Upon his release from the militia, Gibbon decided to embark on a long-projected tour of Europe. In 1761 he completed, in French, his first work, ‘Essay on the Study of Literature‘, in defence of classical studies. This had given him some status abroad and when, in 1763, he visited Paris, his essay “entitled“ him to a “favorable reception“. But it was Rome that moved him to an unwonted enthusiasm, that seemed to give a new form and vividness to all he had read and studied. Here, according to a celebrated passage of the Memoirs:

“On the fifteenth of October 1764, as I sat musing amidst the ruins of the Capitol, while the bare-footed friars were singing Vespers in the Temple of Jupiter, the idea of writing the decline and fall of the city first started to my mind.”

But it was not until 1772, two years after the death of his father, that Gibbon settled in London and submitted himself to the rigours of his life work. In the interim, he made several sallies into the field of polite letters, dividing his time between the family home at Buriton and the fashionable clubs of London. His memberships in Johnsonʼs literary club was an annoyance to Boswell, who described him as “an ugly, affected, disgusting fellow.”

Gibbon was elected to the House of Commons in 1774. Although he held his seat during the stormy years of the American Revolution, he did not speak once. Like his stint in the Hampshire militia, his eight sessions in parliament he considered not wasted; they comprised “a school of civic prudence, the first and most essential virtue of a historian.”

The first volume of the ‘Decline and Fall’, published in 1776, was immediately acclaimed as a classic and attacked for its discussion of Christianity. Volumes II and III, which followed shortly afterwards, were more quietly received.

Since 1779 Gibbon had been serving on the Board of Trade, a sinecure which added to his income. The Board existed in a state of perpetual virtual adjournment and unbroken sitting vacation until it was dissolved as a result of the campaign conducted against it by Edmund Burke in 1782.

Shortly afterwards, the historian also lost his seat in parliament. As it now became impossible for him to maintain himself in London, he arranged to live in Lausanne with his life-long friend, George Deyverdun.

At Lausanne, in the comfort of his well-appointed bachelor quarters, the last three volumes reached rapid completion.

In a famous passage of his autobiography, he commemorates his deliverance from his labours:

“It was on the night of the 27th of June 1787, between the hours of eleven and twelve, that I wrote the last line of the last page in a summer-house in my garden. After laying down my pen, I took several turns in a berceau, or covered walk of acacias. I will not dissemble the first emotions of joy on the recovery of my freedom, and, perhaps the establishment of my fame. But my pride was soon humbled, and a sober melancholy was spread over my mind by the idea that I had taken an everlasting leave of an old and agreeable companion, and that whatsoever might be the future fate of my history, the life of the historian must be short and precarious.”

For Gibbon it had always been reading and study that “supplied each day, each hour, with a perpetual source of independent and rational pleasure,” just as his library had been “the foundation” of his works and the “best comfort” of his life.

In the “autumnal felicity” that followed in the wake of the completion of ‘Decline and Fall‘, Gibbon began work on his autobiography. But the mood was shattered by the death of Deyverdun in 1789, and in 1793 Gibbon returned to London.

He had been suffering for some time from dropsy and the gout and upon his return, underwent a number of operations.